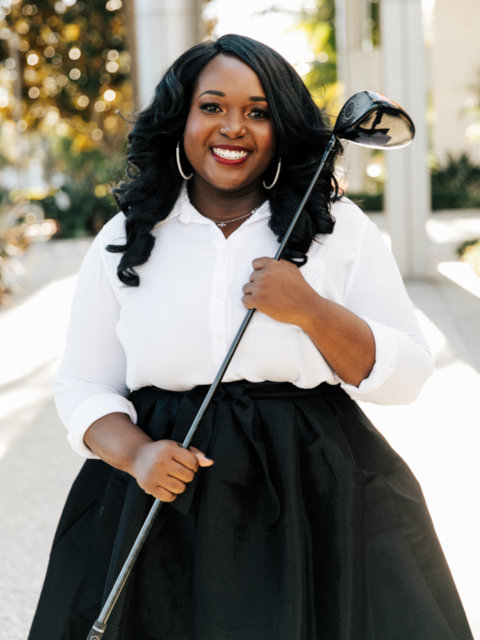 Mackenzie Mack is a competitor, a teacher and student when it comes to the game of golf. As a competitor, Mackenzie has played at the most elite levels of the game against some of the best in the world.  As a junior golfer she played for and was a member of the following tours: the American Junior Golf Association (AJGA), the International Junior Golf Tour (IJGT), Teens on the Green and Western States Golf Association (WSGA). Mackenzie also enjoyed the honor of competing for: the Tiger Woods Junior Golf Team for 3 years, the Girls America Cup team from southern Nevada for four years and the First Tee of Southern Nevada in the First Tee Open at Pebble Beach two years in a row. Also during her career, she was recognized as one of GolfWeek’s top 100 junior golfers in the country.

After achieving a stellar junior golf career, Mackenzie was awarded a full golf scholarship to Indiana State University (ISU) where she became the first black woman to compete as a member of the Women’s Golf Team. Mackenzie graduated from ISU in 2010 with a major in Marketing and minors in Finance and Spanish and achieved magna cum laude honors. She also received a Master’s in Business Administration (MBA) from the ISU Scott College of Business in 2011.  During her time at Indiana State, Mackenzie also spent one season as the ISU Women’s Golf Team Assistant Coach and co-founded a non-profit organization called Tee it Up, Inc.

Mackenzie Mack founded Tee it Up as a means of growing the game of golf and sharing her passion with underserved communities. In 2011, Tee it Up was awarded a grant that allowed Mackenzie and her team to teach golf to kids in Bitburg, Germany.

As a student of the game, Mackenzie has perfected her craft by becoming a teaching professional member of the LPGA and has status on both the Suncoast Ladies and LPGA Symetra Tours. Mackenzie believes that “In golf and in life, every day is a new day.”